STATEMENT ON THE NANDIGRAM ATROCITIES BY SOUTH ASIA SOLIDARITY GROUP 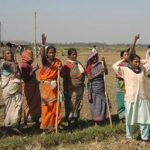 Women protesting against the seizure of their land for a Special Economic Zone in Singur, West Bengal, India

South Asia Solidarity Group condemns in the strongest possible terms the brutal massacre of innocent men, women and children in Nandigram, in a premeditated attack by the West Bengal government on 14 and 15 March.  Outrage at the events of the last few days have brought Bengal to a standstill and they have sent shock waves across India and internationally.  While official statements have already confirmed that at least 20 people have been killed and more than 70 injured, eye witness accounts suggest a much higher death toll, with vehicle loads of dead bodies being removed and dumped in the river by the authorities. It is only by investigating the numbers now missing from the terrorised villages of Nandigram that the true scale of the atrocities will be exposed. Most disturbingly, it is clear that women and children were particularly targeted. Women were gang-raped, children were brutally attacked, and there are large numbers of young girls and children among the ‘disappeared’ in the targeted villages. The villages of Sonachura and Bhangabhera have been razed to the ground and the entire population has fled. Amnesty International reports that police had continued to fire at fleeing protesters. The operation in which a 5,000 strong contingent of police forced their way in had been planned a week in advance by the leadership of the ruling CPI(M) in West Bengal. CPI(M) MP Lakshman Seth was on the scene directing CPI(M) cadres to prevent the media from entering Nandigram. The Times of India team was told by a gang of 100 CPI(M) cadres ‘If you value your life, turn back immediately’ as they tried to enter Nandigram to cover the carnage.  The victims of these atrocities perpetrated by the West Bengal government were simply resisting the unilateral seizure of their land – which was their only source of livelihood – by the West Bengal government. The land is to be handed over to an Indonesian Multinational, the Salim group, for the establishment of a Special Economic Zone (SEZ) under the  SEZ Act 2005 and the colonial Land Acquisition Act 1894. SEZs which have been dubbed ‘developmental terrorism’ create vast enclaves which are virtually foreign territories controlled by large multinational corporations and will render thousands destitute. In Nandigram, 61% of the people threatened with the loss of their land are Muslims while the remainder are mainly from dalit communities.     The West Bengal government and national leaders of the CPI(M) have tried to portray the violence as a necessary response to the presence of ‘naxalites’ and ‘outside elements’, in a pathetic attempt to justify the carnage.  The reality is that Nandigram is a horrific illustration of how far the West Bengal government is prepared to go to crush people’s resistance to the usurpation of their land by global capital.

The following link takes you to a petition to the Governor of West Bengal denouncing the Nandigram atrocities:  http://www.petitiononline.com/nandigra/petition.html  For more information contact South Asia Solidarity Group: sasg@southasiasolidarity.org