[ PRESS RELEASE ] “Whose Democracy?” Asks a Seminar in London on the Eve of India’s Independence Day

“It is as though there is a hierarchy of lives – for some, many more have to be lost, before people listen.” Ms Kaul said.

She said India’s relationship with Kashmir—humiliating attitude towards them, killing, injuring and blinding of innocent people, intimidating of journalists, and clamping down on the media and shutting down internet and m 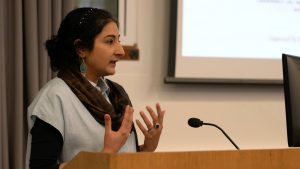 obile communication— was like Britain’s relationship with India under colonial rule.

Ms Kaul, a Kashmiri Pundit herself said that the uprising of Kashmiri people has nothing to do either with religion or with Pakistan. Kashmir happens to be a Muslim majority territory and India is using it as a pretext to demonise a people’s uprising as separatist. In today’s Islamophobic environment it fits well with the broader narrative, she said.

Ms Kaul spoke of India’s oft repeated claim that Kashmir is an “integral part of India” and called it a very “imperial” attitude.  “Why do you have to keep on repeating it? And why do you have to kill people to keep it integral?” She said that Kashmir is not like any other Indian state. It has its own history. She stressed that until 1953 when Sheikh Abdullah was arrested by Jawaharlal Nehru, Kashmir had its own flag and own Prime Minister, not a Chief Minister.

Also speaking at the meeting was edit or of Urdu Media Monitor M Ghazali Khan. He said that Babri Mosque, Muslim Personal law, Urdu and Minority Character of Aligarh Muslim University each and every controversy being used and exploited by BJP was created by the Congress. He said that during its tenure Congress engineered anti-Muslim riots, BJP has modified the trend with its “Gujarat Experiment” adding and adopting in it “Love Jihad”, “Ghar wapsi” and “Gau Raksha” as the situation requires. 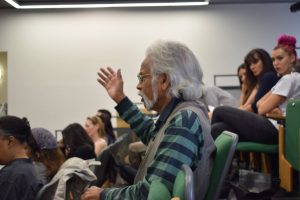 oon after the partition a totally false and mischievous premise was created in India that Muslims alone were responsible for that historic blunder and was used and continues to be used as a weapon to victimize them. However, the publication between 1970 and 1983 of secret and official documents (Transfer of Power 1942-47) that hitherto had been in possession of the India Office Library, present a different picture of that period. In the light of these documents Gandhi, Nehru and Patel appear to be as much responsible for the partition as was Mohammad Ali Jinnah, founder of Pakistan.”

He quoted Maulana Abul Kalam Azad from his book India Wins Freedom in which Maulana writes, “It must be placed on record that the man in India who first fell for Lord Mountbatten’s idea was Sardar Patel. Till perhaps the very end Pakistan was for Jinnah a bargaining counter, but in fighting for Pakistan, he had overreached himself. His action had so annoyed and irritated Sardar Patel that the Sardar was now a believer in partition…In fact Sardar Patel was fifty percent in favour of partition even before Lord Mountbatten appeared on the scene. He was convinced that he could not work with the Muslim League. He openly said that he was prepared to have a part of India if only he could get rid of the Muslim League. It would not perhaps be unfair to say” Maulana goes on, “that Vallabhbhai Patel was the founder of Indian partition.” 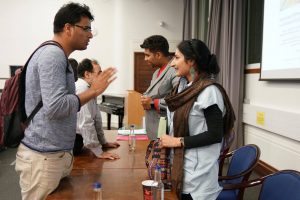 ommunities as early as 1920s or may be much before that. He quoted noted Urdu writer Maulana Majid Dariabadi as having written, “In [19]20-21 no one knew what Hindu-Muslim riots were. In the beginning of 1924 this epidemic had broken out with full force… Each petty argument resulted into distrust and doubts. On one hand there was the rise of organisation of shudhdhi programmes on the other hand it was responded to by calling preaching groups. A discussion starting with politics always ended on dharam and Iman [religion and faith].”

He also quoted known freedom fighter Maulana Mohammad Ali Jauhar as having written to his daughter, 6 November 1930, from London where he had come to attend the Roundtable Conference as, “News that we here have received through American newspapers create a hope that the demand for India will be for a united one – May God also cause it so. Success in whatever the conditions is very difficult yet is necessary…May, after having travelled overseas, the [Hindu] Maha Sabhai mind-set change and Indians realise in true sense the curse of slavery that they are under. May they overcome their desire to dominate and subjugate one another and, instead, strive jointly together to free themselves from the slavery by others? May God inspire the Hindus and the Muslims to do justice with each other and treat each other fairly. May they abhor slavery so much that they neither accept to be slaved by others nor try to enslave others. Amen!”

Mr Khan stressed that the only way forward was a strong alliance between Dalits, Muslims and all other secular forces in India. Dalit activist and Chair of CasteWatch UK Satpal Muman who was also due to speak could not personally attend the seminar but sent a written speech that was read out by at the meeting. In his message Mr Muman sent his solidarity with the hugely inspiring and significant Dalit As 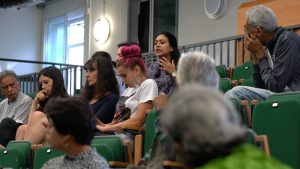 mita march currently taking place across Gujarat, to culminate in a mass rally on Independence Day at Una, the scene of the recent brutal attack on Dalits by self-styled Gau Rakshaks (Cow Protection Vigilantes) which sparked the movement.  He added that the “stinking caste system” had followed Indians to the UK and the current British government is acting undemocratically by ignoring legislation passed by parliament safeguarding Dalits from discrimination in the UK.

Kalpana Wilson, chairing the meeting on behalf of South Asia Solidarity Group, also expressed her solidarity with the Dalit movement in India. She said this was a hugely significant moment with the Dalit movement putting forward the agenda of land redistribution as one of its key demands. As one of the leaders of the movement Jignesh Mevani has said, this hits at the base of Hindutva economic policy of unscrupulously handing over land to corporates like Ambani and Adani. She also highlighted the initiatives for unity between Dalits and Muslims which are being taken by the movement, which is taking place in Gujarat, till now known as the ‘laboratory’ for the Hindu right, where the genocidal attacks on the Muslim community had taken place in 2002.

The seminar also heard a forceful narrative on Dalit lives titled “Black and Blue” written and read out by actor and story writer, Saunvedan Aparanti.

He said, “What comes to your mind when you think of I 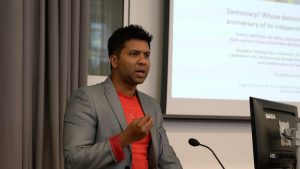 ndia? If you’ve been seduced by films, books, pictures and anglophile Indians over the last century then you will no doubt paint a happy picture. You might romanticise the poor yet happy people, the colours, the cuisine, the attire, the mystics, the music, the dance, the cacophony, the heat and the sensory overload of this one country. The only colour missing in your picture will be any shade of black because black is a colour that India hides. Black is a colour that India detests whether it be the colour of your skin or the colour of the sewer that you’re lowered in. A bottomless pit is where you will find the true colour of India.”