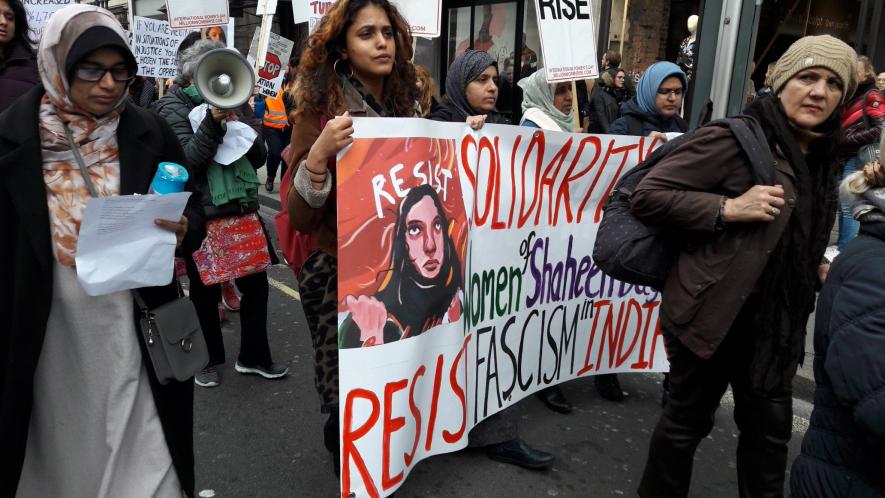 At the several thousand strong Million Women Rise 2020 march against male violence which took place in London today on the eve of International Women’s Day, a vibrant contingent of women marched in solidarity with Shaheen Bagh, the women’s sit-in in Delhi, which has become a symbol of the resistance against the Modi regime’s discriminatory and fascistic Citizenship measures and all the other Shaheen Baghs across the country. These measures – the Citizenship Amendment Act (CAA), National Register of Citizens (NRC) and National Population Register (NPR) – are widely recognised as being a first step on the road to ethnic cleansing and genocide and represent the vision of an exclusive Hindu state promoted by India’s Hindu supremacist BJP government led by Narendra Modi.

The Shaheen Bagh bloc at the demonstration highlighted the iconic nature of the women’s occupation in Delhi which has been going on since 14 December and has inspired hundreds of other Shaheen Baghs all over India. The protests sites have become spaces of safety and creativity where women are putting forward an alternative vision of the future in which all kinds of oppression can be challenged. Muslim women will be those most affected by the citizenship measures and they have been at the forefront of resistance, countering the stereotypes, which are also pervasive in India, of Muslim women as passive victims.

During the horrific violence of the Delhi pogroms at the end of February, 53 people, mainly Muslims, lost their lives, hundreds were severely injured and thousands saw their homes burnt down and their property destroyed. However, Shaheen Bagh remained strong, despite severe intimidation. Women in some of the other occupation sites, such as Jaffarabad in North East Delhi, were forced by the horrific attacks by Hindu far-right mobs as well as the Delhi police to briefly abandon the occupation, but they have now all moved back, stronger than ever, to continue their peaceful protests defying brutal state repression and fascist violence.

Marching alongside Turkish, Latin American and other feminists from across the world facing repression and patriarchal violence, the Shaheen Bagh bloc in London shouted slogans such as ‘Shaheen Bagh we stand with you, you won’t let the fascists through’, ‘Modi, Shah you can’t hide, you are committing genocide’, and ‘Shaheen Bagh is here to stay, until you scrap the CAA’ and carried a banner with artwork produced at Shaheen Bagh.

This is a global agenda linking India’s prime minister Modi with Trump, Netanyahu and Boris Johnson. Linking the suffering of Kashmir, Myanmar, Palestine and India to the US and UK. In India this fascism takes the form of upper-caste Hindu supremacy. The Indian government is demanding that people prove their citizenship with documents going back generations. If you are a Muslim and have no papers of this sort you will be locked up in a detention centre even if your family has always lived in the country. Massive detention centres have already been set up and many who have been detained have died there. The new Citizenship laws make religion central, for the first time. In this country we know about the horrific injustice of Windrush, we know about Yarls Wood, these are the symptoms of fascism. In India we can see the next terrifying stage. As in Hitler’s Germany, denial of citizenship to millions of people is likely to be followed by a genocide. But in these dark days, the wonderful inspiring flowers of resistance have bloomed. Muslim women, those who have been stereotyped as passive, as unresisting, have come out in their thousands, they have organised continuous sit-ins in resistance to these genocidal laws.