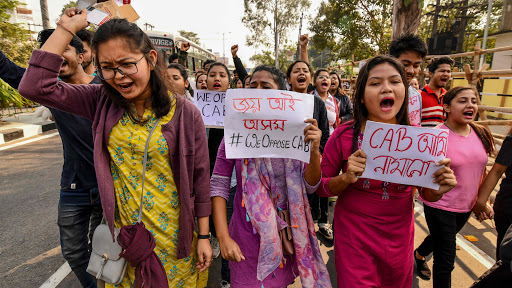 On 18th December members of the Indian diaspora, Indian students from all the major London universities and colleges, and other concerned people in the UK will be protesting outside the Indian High Commission in solidarity with those opposing the recent  Citizenship Amendment Act (CAA) and National Register of Citizens (NRC) in India.

The organisers issued the following statement:

The Citizenship Amendment Act (CAA), which has recently been passed by the Indian parliament is an attack on the very basis of Indian citizenship. The law allows migrants from Pakistan, Bangladesh, and Afghanistan to become Indian citizens provided they are either Hindu, Sikh, Parsi, Jain, or Christian. By explicitly linking Indian citizenship with religious affiliation, and conspicuously excluding Muslims, the law seeks to subvert the secular nature of the Indian constitution and build a legal foundation for the Bharatiya Janata Party’s stated dream of creating a Hindu Rashtra (state) in India.

Combined with the National Register of Citizens (NRC), the new citizenship rules will result in the potential disenfranchisement of India’s 200 million Muslims. The NRC process will require citizens to prove their  status with documentation going back several generations. Based on the experience of the state of Assam, which has already been through such an exercise, this process will  intimidate and harass ordinary citizens, especially those from poor and marginalised backgrounds who do not have all the requisite paperwork. With the government proposing to implement the NRC across the country, the CAA now aims to give citizenship to the large proportion of Hindus caught in the snare of the NRC, making it essentially an exercise to exclude Muslims.

The passing of the CAA has been met with protests across the country by people from all backgrounds and religions. In every major Indian city, people have been gathering to express their opposition to the Act.  There have been democratic, peaceful protests where ordinary citizens have collectively recited the Preamble to the Constitution. Many have also pledged to boycott and refuse to cooperate with the NRC. In the Northeast , where protests have been particularly intense, the government has deployed army and paramilitary units, imposed curfews, and blocked Internet access. Five young people, Dipanjal Das, Sam Stafford, Dwijendra Panjing, Iswar Nayak and Abdul Alim, have already been killed in police firing.

Students across the country have risen up in peaceful protests to demand that the basic structure of the Constitution of India be maintained and have been met by brutal repression from the police. On Sunday, 15 December, Delhi Police illegally entered the campus of Jamia Millia Islamia University and used pellet guns to fire at protesting students. Tear gas shells were fired at students studying in the library and inside hostel rooms, creating havoc and seriously injuring many, including at least two students with bullet wounds. Muslim students were targetted for particularly acute violence, accompanied by Islamophobic abuse. Women students have said that the police sexually assaulted them after barging into their hostel.  Multiple reports of police violence against peaceful student protests have also emerged from Aligarh Muslim University (AMU).The implementation of curfew and shutting down of internet has prevented students at AMU from communicating with the outside world, but the press has been able to confirm that there have been severe injuries including one student who lost his hand when hit by a teargas shell.

Protesting is a basic democratic right. In India under Narendra Modi’s  regime we have seen alarming suppression of dissent along with sustained efforts to reinforce Brahmanical Hindutva ultra-nationalist ideologies and the vision of a regressive purist Hindu nation. The violent attacks by  the police and military on peaceful protests is yet another blatant display of the Indian Government’s repressive and autocratic nature.

The police brutality has since led to  enormous solidarity protests in Indian universities across the country. Prime Minister Modi, meanwhile, has sought to further whip up communal violence by referring to the clothes of protestors, in order to target them as Muslims. However rather than dividing people of different religions against each other, the state’s response has brought them together in outrage. To oppose this authoritarian regime and its divisive agenda more than 60 organisations have come together giving a nation-wide call for observing 19th December as the day to reject the Citizenship Amendment Act passed by the parliament. There will be co-ordinated protests in more than 100 locations across India. 19th of December will be observed all over the country as a day of martyrdom of freedom fighters Ashfaqulla Khan, Ramprasad Bismil and Roshan Singh executed by the British in 1927. Recalling their “saajhi virasat” (shared heritage) and “saajhi shahadat” (shared tradition of martyrdom), citizens all over the country will hold public events to reject Citizenship Amendment and to demand “saajhi nagrikta” (undivided citizenship). They will take a pledge for non-cooperation with any registration (NRC or National Population Register) based on this discriminatory and divisive citizenship.

We strongly condemn the Citizenship Amendment Act passed by the Indian parliament. We oppose the plans to implement the National Register of Citizens across the country.  We stand in solidarity with protestors across India who are fighting brutal government repression in order to exercise their democratic rights.