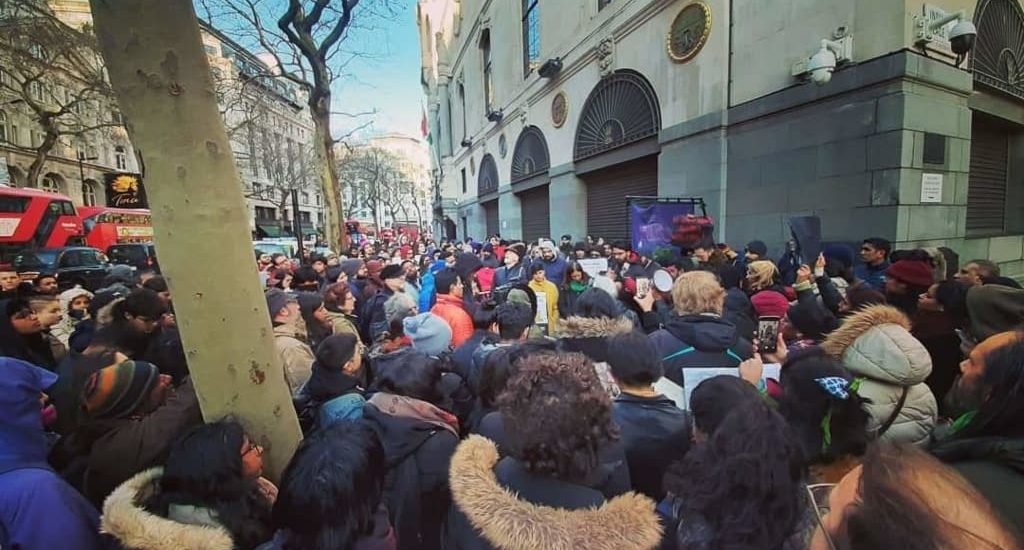 More than 500 people mainly belonging to the Indian diaspora gathered outside the Indian High Commission in rain and snow in London this afternoon, to protest against the state-sponsored Delhi pogrom against Muslims, raising angry slogans holding Narendra Modi, Amit Shah, and the Delhi Police responsible for the genocidal violence.

While Narendra Modi was feting US President Donald Trump, Delhi was ablaze in the fire of a targeted anti-Muslim pogrom which has already claimed 38 lives and left hundreds critically injured. Vast areas of North East Delhi have been devastated with hundreds displaced, their homes burnt and livelihoods destroyed. The fire of genocidal violence was lit and stoked by the ruling BJP over the last six years but triggered, more immediately, by the poisonous anti-Muslim rhetoric and the ‘Desh ke gaddaro ko goli maro’ (‘shoot the traitors’) call to action by a series of BJP leaders. Many were reminded of the genocidal violence against Sikhs in 1984 and against Muslims in Gujarat in 2002.

The attacks have been overwhelmingly targeted against the poorer sections of the Muslim community in Delhi. The Delhi Police, which is controlled by the ruling BJP, have destroyed CCTV cameras to protect the identities of the leaders of the violent anti-Muslim mobs, used Islamophobic abuse, publicly humiliated and beaten Muslims, arrested Muslims on false pretexts, and broken into Muslim homes to allow anti-Muslim mobs to plunder them. They have also allowed these mobs to prevent the injured from reaching hospitals. It was only after the Delhi High Court ordered the police to ensure safe passage to ambulances that the wounded were transferred to hospitals with adequate medical facilities.Why did it happen?

The underlying causes for the unleashing of genocidal violence at this point appear to be:

(a) the entirely legitimate dissent of ordinary people against a fascistic citizenship law- the Citizenship (Amendment) Act (CAA) and its accompanying registers of citizenship, the National Register of Citizens (NRC) and National Population Register (NPR) – which acting together will leave Indian Muslims disenfranchised – and constitute a first step to ethnic cleansing. The powerful countrywide wave of protests against the CAA-NRC-NPR found a strong and resilient citadel in Delhi with continuous sit-ins by thousands of Muslim women, which are still continuing. The rattled Modi-Shah regime is now trying to drown the peaceful power of protests in blood;

(b) the spectacular snub given by the Delhi electorate to the BJP’s viciously Islamophobic Assembly election campaign. It is significant that the centres of the pogrom are precisely the few areas where the BJP managed to win in the Assembly elections.However, there have been many heartening instances of Hindus, Dalits and Sikhs protecting their Muslim neighbours, and Sikh gurdwaras opening their doors for victims fleeing violence.

We stand in solidarity with the survivors of the Delhi Pogrom and with the courageous citizens of Delhi as they fight for justice and peace!“As members of the Indian and South Asian diaspora in the UK, we stand with the survivors of the Delhi pogrom and the courageous anti-CAA movement. We condemn the close relationship between the Boris Johnson government and Narendra Modi’s genocidal BJP government. This alliance of far-right regimes has been deepened by the appointment of British Indian Modi supporters including Priti Patel and Rishi Sumak to key cabinet positions. They do not speak for us!” – Nirmala Rajasingam, South Asia Solidarity Group“The Delhi Pogrom has already killed 38 Indian Muslims, with many injured. This is no accident, Modi has led India here and the horrific scenes in Delhi show BJP ideology in action. British Indians will not be silent.” – Nadia Whittome MP”The violence in Delhi must not be seen as a riot. What has happened is a state-sponsored pogrom against the city’s Muslim communities.

There is a mountain of evidence showing how BJP leaders and their media ecosystem incited mobs to commit violence, how the police either stood by or actively participated in this violence, and how the courts have completely abdicated responsibility” – South Asian Students Against Fascism”India is now a fascist Hindu dictatorship where the rule of law has been suspended. If the world does not take note and react urgently, the consequences will be disastrous.”– SOAS India Society“We are shocked by the horrific anti-Muslim pogrom spearheaded by the Hindutva right this week. But we are truly inspired to see that the women of many areas of Delhi have returned to their sit-in protests. These women have been occupying these sites like Shaheen Bagh for the past two months in the bitter North Indian winter cold. We in the UK and across the world must learn from their strength and courage in these turbulent times of increasing fascism” – Anjum Mouj, London Black Women’s Project