HomeNewsNOT IN OUR NAME! – TORIES INVOKE MODI IN RACIST AND ISLAMOPHOBIC MAYORAL CAMPAIGN

NOT IN OUR NAME! – TORIES INVOKE MODI IN RACIST AND ISLAMOPHOBIC MAYORAL CAMPAIGN 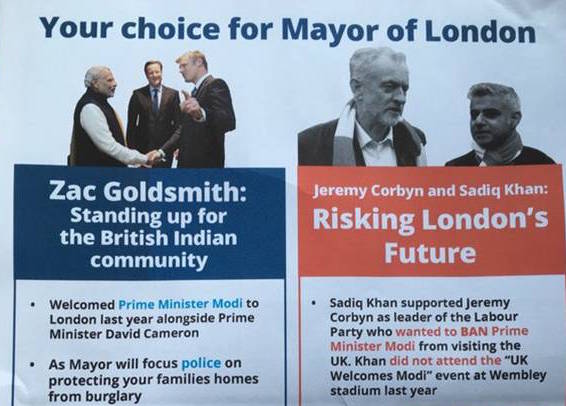 As a desperate Zac Goldsmith accuses Labour mayoral candidate Sadiq Khan of giving ‘cover to extremists’ the racism and Islamophobia of the Conservative Mayoral campaign could not be more blatant. One element of this has been the barrage of recent propaganda material  targeted at Indian and Sri Lankan voters which is not only deeply racist and a despicable attempt at colonial-style divide and rule, but also completely misrepresents the views of South Asian people in London about Indian PM Narendra Modi.

We condemn the campaign by Zac Goldsmith and David Cameron which:

While the campaign recycles all the existing racist and colonial tropes about South Asians, it also reinforces the vicious lies and myths circulated by the Hindu right in India as well as here in Britain – that India is a Hindu upper caste nation, and that no-one else belongs there, and that anyone from a Hindu background is defined by their religion and can be mobilised through an appeal to religious chauvinism. This is one of the most pernicious, if less visible aspects of the Conservative mayoral campaign and must be exposed and confronted.

(1 For example, of the nearly 1.5 million people of Indian origin in Britain according to the 2011 Census, Dalits are estimated to number half a million. And almost a quarter of the 1.5 million people of Indian origin gave their religion to the 2011 Census as Muslim or Christian, belonging to the very communities who have been persecuted in India by Modi’s government (their existence has been ignored by the Tory campaign).