In the run up to Prime Minister Narendra Modi’s visit to the UK, four of UK’s foremost Dalit organisations have written to Narendra Modi, expressing their dismay about the recent revelations by investigative news portal Cobrapost. Their letter notes that senior BJP politicians were involved in the massacres of some 144 Dalit men, women and children in Bihar and that Mr Modi has so far neither spoken out against  the self-confessed killers and their accomplices nor taken any action against them.

Spokespersons from the organisations urge Mr Modi to act because his ‘ lack of action on this issue gives the shocking  message that Dalit and oppressed caste lives do not matter in India’ . They urge him to act urgently to ensure that the self-confessed killers are brought to justice and that all the politicians, including senior BJP politicians, are dismissed from their posts, arrested and charged.

The letter in full is as follows:

To the Prime Minister of India,

We are deeply shocked by the recent horrifying revelations about the massacres of Dalit and other oppressed-caste people in Bihar and are writing to you to express our dismay that  you have so far neither spoken out against  the killers and their accomplices nor taken any action against them.

The revelations caught on camera by the news portal Cobrapost’s are briefly as follows:

The Amir Das Commission, which was set up in 1997, after the Laxmanpur Bathe killings,  to investigate these massacres was disbanded in 2005 by Nitish Kumar of the JDU, then in alliance with the BJP, in order to appease and shield his erstwhile BJP allies.

As you may know the Patna High Court acquitted all the perpetrators claiming there was ‘no evidence’, and that eyewitnesses were lying. The statements of the acquitted men to Cobrapost prove that the eyewitnesses told the truth.

Can such horrific violence be tolerated in a democratic country? Unfortunately your lack of action on this issue gives the shocking  message that Dalit and oppressed caste lives do not matter in India. We urge you therefore to act urgently to ensure: 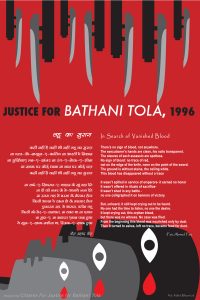 More on the Cobrapost revelations: