Recently, you, along with top ministers of your cabinet, reported to an unconstitutional authority, the Rashtriya Swayamsevak Sangh (RSS), who have called you to account for your actions. http://thewire.in/2015/09/04/indias-prime-minister-should-be-careful-about-the-company-he-keeps-9976/

As women concerned with combating violence against South Asian, Black and Minority Ethnic women and girls, we find this extremely disturbing because the RSS is a paramilitary organisation modelled on the Italian Fascist and German Nazi parties  and is known, along with its allied groups, for its violent misogyny openly displayed in the pronouncements of its leaders. http://www.ibtimes.com/hindu-nationalists-historical-links-nazism-fascism-214222

RSS Chief, Mohan Bhagwat, for example, declared in 2013 that rape happens only to westernised women. http://www.ndtv.com/india-news/rapes-occur-in-india-not-bharat-says-rss-chief-mohan-bhagwat-509401

Revered RSS ideologue V.D. Savarkar exhorted Hindu men to prove their masculinity by raping non-Hindu women, who are seen as ‘symbols’ of the ‘enemy culture’. The public condemnation of this aspect of Savarkar’s ideology by you is, we feel, particularly important, because it was under your watch as Chief Minister of Gujarat in 2002, that this ‘theory’ was put into practice with countless Muslim women raped, mutilated and murdered. http://www.hrw.org/reports/2002/india/India0402-03.htm#P527_94439

Few of those responsible for the rapes and murders during the pogrom have been brought to justice. http://www.thehindu.com/news/national/only-the-pawns-have-been-jailed-say-victims/article3845273.ece

Babu Bajrangi, a leader of the Bajrang Dal, sister organisation of the RSS, was caught on camera, in 2007, boasting of the rapes and murders he had committed in Gujarat in 2002 and recounting how he attacked nine month pregnant Kauser Bano. Her belly was torn open and her foetus wrenched out, held aloft on the tip of a sword, then dashed to the ground and flung into a fire. Bajrangi has been charged for these terrible crimes but he is continually out on bail and like many others who were involved in the rapes and murders during the 2002 pogrom, he is effectively free.

Equally worrying is the fact that your own cabinet includes a number of ministers against whom criminal cases, including rape, are pending (Sanjeev Baliyan the Minister of Agriculture is one example). We urge you to dismiss these men and also dismiss your advisor, Amit Shah (an RSS cadre and President of your party the BJP) who directly incited rape during your election campaign in April 2014 calling on Hindus to ‘take revenge’ on ‘those who have been ill treating our mothers and sisters’ . http://timesofindia.indiatimes.com/news/Vote-for-BJP-if-you-want-revenge-Amit-Shah-at-Muzaffarnagar/articleshow/33275312.cms

After the brutal rape and murder of two young oppressed caste women in Uttar Pradesh in 2014 you did not condemn the culture where such rapes and murders of Dalit and oppressed caste women are commonplace or do anything to prevent such brutality taking place again. http://timesofindia.indiatimes.com/india/Narendra-Modi-pained-by-Badaun-rape-techie-killing-in-Pune/articleshow/

Instead you declared that ‘honouring women and protecting them should be the top-most priority of the government’ despite the fact that such concepts of ‘honour’ and ‘protection’ are routinely used to justify violence against women.

These organisations are also responsible for vicious ‘moral policing’ which has   led to murderous attacks on couples who cross religious and caste boundaries. Your silence sends them a message of approval. http://indianexpress.com/article/india/five-episodes-of-moral-policing-that-made-national-headlines/

A number of laws directly contribute to gender violence, for example, the Armed Forces Special Powers Act which allow the police and armed forces to perpetrate horrific sexual violence (effectively with impunity) in Kashmir and the North Eastern states of India http://www.thehindu.com/news/national/dont-allow-armymen-to-take-cover-under-afspa-says-verma/article4337125.ece  ; the law which permits marital rape; and the homophobic section 377 of the Indian Penal Code which criminalises LGBT people. But despite popular campaigns against these laws you have chosen to retain them. What does this say about your attitude to gender violence

We would also like to point out that the overseas wing of the RSS is currently being investigated by the British Charity Commission for hate speech against Christians and Muslims https://www.gov.uk/government/news/new-charity-investigations-global-aid-trust-and-hindu-swayamsevak-sangh-uk

Surely these are not organisations by which a Prime Minister of democratic and secular India should be guided, or held accountable.

We urge you Prime Minister Modi to make your position clear. Do you approve of the hate crimes, patriarchal violence and misogyny perpetrated by the RSS and its affiliated organisations? If not, we urge you to openly condemn these organisations.

Camille Kumar, on behalf of Freedom Without Fear Platform, London

Sanjeevini Dutta, on behalf of Kadam Asian Dance and Music 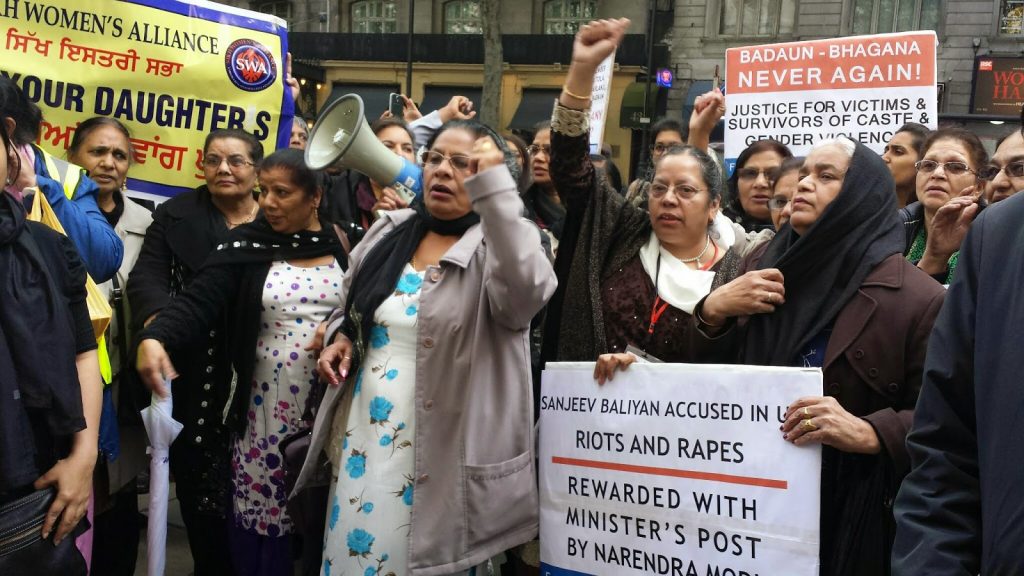