HomeNewsIn commemoration of the 2002 Gujarat genocide

In commemoration of the 2002 Gujarat genocide 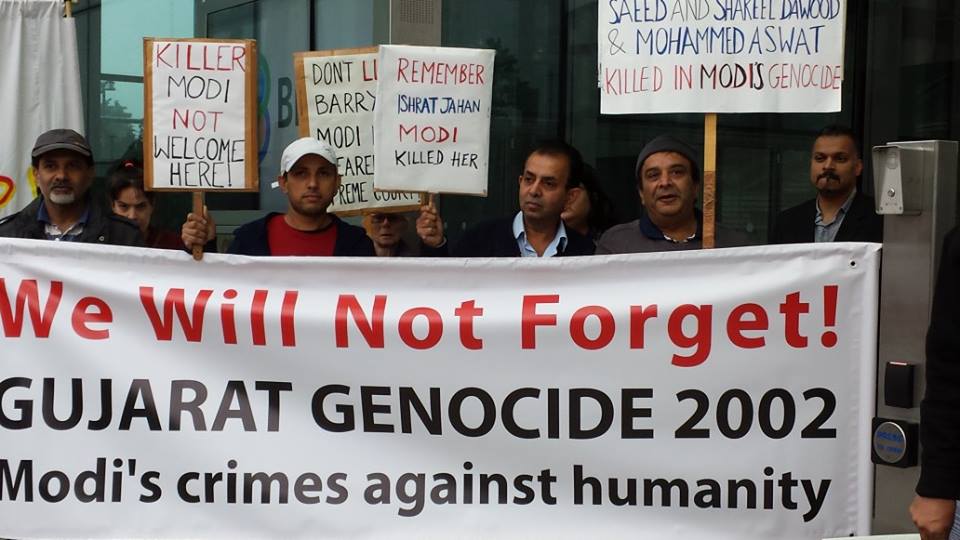 In commemoration of the Gujarat genocide, which took place during the week following 28 February 2002, we repost the details of a meeting on Gender and the Hindu Right which we organised in collaboration with the LSE Gender Institute and the Freedom Without Fear Platform on 3rd March, 2014. Watch these powerful and moving contributions from speakers on the Gender and Hindu Right panel.

Outlining the context of the meeting, Kalpana Wilson of South Asia Solidarity Group and the LSE Gender Institute emphasised that the targeting of minority women for appalling violence is not a side effect but absolutely central to the project of the Hindu right and how it operates. Linked to this, she said was the intensification of surveillance and control over women, the rise of ‘moral policing’ targeting students and other young people, and the invocation of the “protection” of Hindu women as a justification for violence against religious minorities and Dalits, including rape of women.

She also noted that Hindu right supporters here in Britain have been promoting the completely unfounded myth of ‘love jihad’ in British universities by students and this fits in with the agenda of the British state and its Islamophobia. While these groups are promoting the image of a so-called ‘Gujarat model’ of development the position of women in Gujarat where Modi has been Chief Minister since 2001 is abysmal – demonstrated by the sex ratio (2011 census) of 918 women per 1,000 men (below the already scandalous national average of 940), that hints at the magnitude of female infanticide, and the very high gender imbalance in school enrolments compared to all-India levels. Very high rates of domestic violence against women are accompanied by very low conviction rates in the state.

Nishrin Jafri Hussain, in a powerful and moving contribution spoke of the unimaginable brutality perpetrated on the bodies of Muslim women in the villages around Ahmedabad. Speaking in London for the first time Nishrin, whose father, the MP Ahsan Jafri, was brutally murdered in the 2002 anti-Muslim violence in Gujarat state, and whose family is waging an ongoing legal battle to bring Narendra Modi, who presided over the violence as Chief Minister of Gujarat, to justice showed a series of photographs of those who had been murdered, with many gaps for those of whom no photos exist. She told the meeting that the numbers of rapes were far more than those reported because these experiences were not only deeply traumatising and humiliating but that it was a taboo speaking about them.

She said that in the Gulbarg society where she grew up and the area around it every Muslim house had been burnt down and every family had lost loved ones – deep scars of these losses remain. She told the meeting that her father had been against the ghettoisation of Muslims and committed to living in a mixed Hindu and Muslim area even after the riots of 1969.

When his house where nearly 200 people were sheltering was attacked, and was surrounded by armed Hindu mobs, he had called for help to the central government to no avail. When he phoned Narendra Modi, the Chief Minister replied ‘ You are on your own Jafri, save yourself’.

Many in the audience had tears in their eyes as Nishrin reaffirmed her family’s commitment to bringing Narendra Modi to justice.

Angana Chatterji an anthropologist and leading human rights specialist, who convened a people’s tribunal in Odisha in 2005 spoke about her work documenting the experiences of sexual violence in Odisha, noting that ideologies of conservative patriarchy had been taken over and intensified by the Hindu Right across India in a series of attacks on women in minority communities Christian, Muslim, Adivasi and Dalit over the years.

Meena Kandasamy an oppressed-caste feminist and writer spoke about the way the language and discourse of Hindutva is conveniently utilised by fanatical Hindu upper caste groups like the Pattali Makkal Katchi, in Tamil Nadu or other caste organisations to construct Dalit men as the “Other” and create a myth similar to that of ‘love Jihad’ that they deceive Hindu upper caste girls by “making” them fall in love. The idea that once such a formula of love-jihad is deployed it can serve to function to contain, and threaten, women’s independence.

The meeting was as one student who attended it described it, ‘both deeply disturbing and a call to action’ and the organisers announced that the campaign internationally to bring Modi to justice would continue.