We mourn the deaths of thousands of men, women and children killed in Gaza – not because they are disproportionate but because ‘proportionate’ does not make sense in a genocide.

We condemn Israel’s colonial policy of collective punishment which has held Gaza under siege – starving the population of essential needs  and then deliberately bombing hospitals,  schools and homes; killing people as they flee from the bombing; flattening vast areas of Gaza and  destroying its power supply and water.   This is a policy which we as South Asians know from our history. In India it was used by the British colonialists after the 1857 uprising –  India’s first war of independence – to wipe out entire populations in village after village. Like the Palestinians they were killed  not because they were convicted of anything, but because they were people of targeted regions. In that period too,  all freedom fighters and all those who resisted or even dissented were constructed as terrorists. Everyone was regarded as a ‘insurgent’.

We condemn the Indian government for its shameful silence and ambiguity over Israel’s genocide and its refusal initially to even discuss the issue in Parliament.  The present Indian government, led by the right-wing BJP, with its ideology of Hindu supremacy,  is betraying India’s own history of anti-colonial struggle.

This history was the reason why India was, for four decades after independence, unequivocally committed to freedom for Palestine. Indian freedom fighters spoke out wholeheartedly in solidarity with Palestine’s struggle.   Gandhi famously declared that “Palestine belongs to the Arabs as England belongs to the English or France to the French.” This is the understanding which  informs all those hundreds of thousands of people who, in the last few weeks, have demonstrated across India against Israel’s genocide..

We condemn the Indian government’s violent response to these peaceful demonstrations which led to hundreds being injured and the death of  fifteen year old Suhail Ahmad in police firing in Kashmir.

Why is it a crime in India today to demonstrate in solidarity with Palestine? Why are  pro-Israel forces  welcomed and pro-Palestine demonstrations  brutally attacked by the police?

We condemn India’s ‘deepening relationship with Israel. Over the last two decades, India’s ruling class has embraced neoliberalism and  grown closer to US imperialism and Indian governments have advocated a ‘pragmatic’ relationship with Israel.  Between 1998 and 2004 when a BJP-led government was in power for the first time, this relationship became even closer with a growing  affinity between Zionism and the BJP’s own ideology of Hindutva, each echoing the others’ murderous Islamophobia, both attempting to rewrite history, both specifically 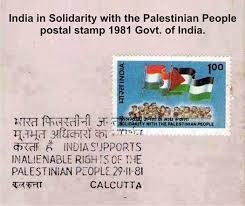 targeting Muslim women and children for the most  inhuman violence and both profoundly misogynistic. The state of Gujarat was described,  during the 2002 pogrom against Muslims as the ‘laboratory of the Hindu nation’. Today Gaza has become a laboratory of Zionism in which illegal weapons, cancer-causing bombs and other  methods of extermination are used with a cruelty which  no words are adequate to describe.

Israel receives weapons from the US and UK but also manufactures and sells its own. India is its biggest customer. It buys a massive  50% of its total weapon sales- a huge contribution to Israel’s economy. Tens of thousands of Indian paramilitary commandos are armed with Israeli Micro-Uzis with which they kill mainly unarmed civilians in India’s central belt, where multinationals are involved in land grabs, or in Kashmir. The Barak-8 naval missile defence system, Mossad surveillance equipment and expertise, and a variety of drones are others in a plethora of  weapons which India is buying and which are proudly on display at India’s Republic Day parade. We condemn these purchases.

We stand in solidarity with the people of Palestine in their struggle for freedom!