On the bank of a motorway known as Beacon Hill, in the no-man’s land of warehouses, factories and tunnels surrounding Heathrow airport’s Terminal 4 building, about 200 South Asian women and men, mostly in their 40s and 50s– sacked workers of the Gate Gourmet factory – are gathered in the first mass picket in 4 weeks.

Hailed by the more progressive sections of the British press as a particularly inspiring industrial struggle, the dispute vanished from the headlines after their union, the Transport and General Workers Union  announced on 27 September that a deal had been agreed. However the deal, though presented as a victory, was no such thing. Of 670 workers locked out, 144 were forcibly made redundant  and 7 were to remain sacked with no compensation. On Beacon Hill today, a month later, no one has any further information, ‘none of us’ the protesters  say bitterly ‘knows who is to be offered their 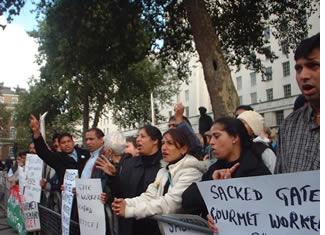 jobs back, who will face compulsory redundancy and who will be simply sacked. Meanwhile we and our families have to survive on £50 a week’ (the meagre statutory minimum hardship money provided by the union).    Meanwhile Gate Gourmet is back in business using cheap ununionised labour, though output has had to be slightly reduced. An American company with its headquarters in Switzerland, Gate Gourmet is the world’s largest supplier of in-flight meals and operates in over 29 countries. Although the company has been showing a loss in its UK branch, and using this to justify its attacks on workers’ rights, internationally the company has been making profits of £1.05bn and has assets of £15 billion. In 2002 it was taken over by the Texas Pacific group, which owns Burger King. David Segal, the owner and chairman of Gate Gourmet worldwide has a history of trying to smash unions in Texas. Although the British press has commented ad nauseum on the ‘unusual sight of women in saris in primary colours’ on Beacon Hill, the Gate Gourmet dispute is the latest in a long series of struggles waged by Asian women workers in Britain. The best known was the 1978 Grunwick strike in which thousands of supporters flocked to the picket line from across the country only for it to be betrayed by the union leadership. It was followed by Thatcher’s notorious anti-union laws banning sympathy strikes and mass pickets. These laws, unique in the EU, have remained in place despite the fact that they have been condemned by the ILO. They have meant that few industrial struggles particularly those of low paid workers in small workplaces have been winnable. The Gate Gourmet dispute is a first in this respect. 1000 British Airways workers went on a one-day sympathy strike in support of their colleagues in Gate Gourmet bringing the airport to a standstill. Three of these workers too are currently suspended.

On Beacon Hill the women, many of them mothers and grandmothers who are the sole wage earners of their families, recount their experiences at Gate Gourmet. Many of them had worked for Gate Gourmet for seven years or more Their wages were on average between £6.00 and £7.00 an hour.

In January this year the management, who had awarded themselves a 30% pay rise told them that they were planning to make 670 people redundant because they were ‘surplus’. Despite the management’s claims that they had ‘surplus’ workers, on 9 August they were told that 130 agency workers were to be employed from the next day onwards. At 9 am on 10 August, when these agency workers were brought in, they stopped work and went to the canteen for a union meeting. The management told them they had five minutes to go back to work otherwise they would be dismissed. When they said they would wait for their union officials, dismissal letters in Hindi, Punjabi, Urdu, Gujarati and English,  obviously prepared in advance, were thrown on to the tables at which they were sitting.

Meanwhile, about two hundred and fifty security guards and armed police, including a van load with police dogs had entered the premises. The doors of the canteen were locked and no one was allowed to leave. They were not allowed any food or water or access to toilets for the next six hours. They were surrounded by police and security guards who stood linking arms. Several of them were physically dragged out by security guards leading to injuries to their backs and necks, others suffered panic attacks when security guards tried to grab their ID cards and locker keys.

Their experiences demonstrate the shape of  struggles to come – the brutality of the management and its total confidence that it can break established practices and basic laws as well as the effects of the fragmentation of the airport workforce who may have once all had the same employer but are now divided among a variety of multinational corporations. There is however a continuity in the racism and sexism and the contempt for low-paid workers displayed not only by the management but by the well-heeled union officials – Tony Woodley the £80,000 a year head of the TGWU announced back in September that he was anxious to close a deal and end a dispute which was inconveniencing British Airways. But the dispute also demonstrates  the possibilities for international solidarity – workers at the US branch of Gate Gourmet and supporters across the world have collected huge sums of money for the British workers in dispute. Sadly this – paid into the TGWU hardship funds is now nowhere to be seen. Meanwhile the trade union leadership have at last called for a repeal of the anti-union laws banning sympathy strikes and secondary actions. Is this mere rhetoric, played out in fruitless negotiations with the Labour Party or will it be put into action by a workers movement? What is not in doubt is the fighting spirit of the workers themselves. Having braved several weeks on Beacon Hill they are now broadening their support base and planning a demonstration on Tony Blair’s doorstep