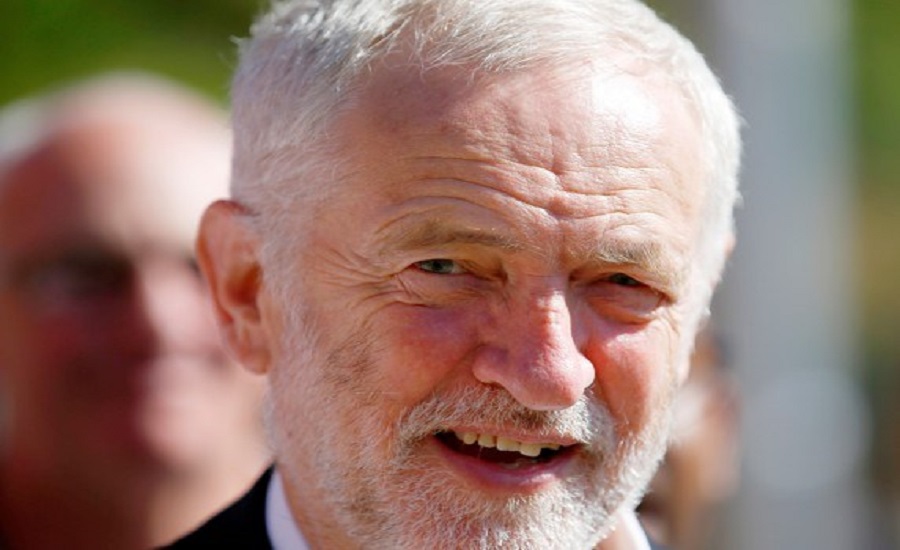 Israel is rarely mentioned openly in the context of interventions into the British elections. It is the elephant in the room which has now been joined by one of its followers – Modi’s ‘New India’. Significantly, the links between the two in the UK have been forged after Corbyn became the leader of the Labour Party by Hindu Far-Right groups in the UK, Israel’s supporters in this country and the Tory party.

On the face of it, the events which have unfolded over the last six weeks or so appear spontaneous: First Whats App messages started circulating urging UK’s Hindus to vote Tory because the Labour Party Conference’s Emergency Motion had criticised Modi’s policies in Kashmir, and hence Labour is anti-Indian. Then in the Gujarati Hindu heartlands of Leicester, Harrow and Brent there were leaflets through people’s doors pressing this message home. Then finally, with just over two weeks left till election day, a spokesperson for the Hindu Council made a statement in support of Rabbi Mirvis’ claim that the Labour Party is anti-Semitic adding that it is ‘anti-Hindu’ too.

None of this, however, is spontaneous. The ground was fertile, because over decades the Hindu Far-Right in this country had systematically spread the Islamophobic, upper caste, misogynistic and militaristic political ideology known as Hindutva.

These organisations include the Hindu Swayamsevak Sangh ( HSS), the overseas wing of the Rashtriya Swayamsevak Sangh (RSS), an organisation modelled on Mussolini’s Blackshirts  (which in India is the driving force behind the lynchings and rapes of Muslims, Christians and Dalits); charities like Sewa International, which together with the HSS was found to have channelled millions of pounds raised from the British public to RSS front organisations in India; the Hindu Forum of Britain; the National Council for Hindu Temples (NCHT), and linked to these organisations, a large number of cultural groups from Hindu faith schools to meditation centres to Yoga clubs.

In the community the Hindu Far-Right forces claim to be ‘traditional’, but in the world of business and finance they are represented by suave, westernised men, like Manoj Ladwa, Narendra Modi’s chief strategist, himself a HSS member, and Alpesh Shah, hedge fund manager and columnist for the pro-Modi Asian Voice newspaper. Shah recently wrote an open letter to Narendra Modi urging him to follow Israel’s example: “the first determinant of your relations with any foreign government should be their treatment of their Hindu population within their borders. It has to be the business of this [India’s] government how Hindus are treated worldwide…This doctrine is not novel in International Relations. The people of Israel provide protection for Jews wherever they are in the world, of whichever nationality. We shall extend no less protection to Hindus”.

While in Britain the Islamophobia of the Hindutva forces has been normalised and invisibilised by the anti-Muslim racism of the state, their caste-based discrimination and abuse has been constantly confronted within the community. Dalit organisations have, since 2000, campaigned for a law against caste-based discrimination, with the support of Jeremy Corbyn, then a backbench MP. In 2010, such a law was effectively passed by the outgoing Labour government and eventually the Enterprise and Regulatory Reform Act 2013 imposed a ‘duty’ on the government to make caste an aspect of race in the Equality Act of 2010. This ‘duty’ has not yet been met and the Tories have all but scuppered the law in response to the Hindu Far-Right’s claim that it would stigmatise the Hindu community. However, the struggle to end caste-based discrimination continues and so does the Hindu Far-Right’s angry opposition to it. In a recent BBC film by YouTuber Parle Patel, blatant caste-based exclusion was exposed, but Satish Sharma, the Chair of NCHT, claimed on camera that it does not happen and said that even the word caste should not be mentioned  ‘it is as toxic for us’ as the n-word.

Despite the tensions over caste, until 2015, the Hindutva groups had continued to hedge their bets and tried to cosy up to both Blairite Labour as well as the Tories, with Manoj Ladwa organising receptions for the Labour Friends of India, and gushing about the ‘deep relationship’ between the Labour Party and India…A veritable ‘Labour of Love we should all feel proud of. This love faded away, however, after Jeremy Corbyn was elected leader and the Hindu Far-Right began to strengthen their links to Israel’s partisans in Britain.

Remarkably, it was in the context of caste, in 2018, that these links first surfaced. At a meeting in the House of Commons about the Caste law, attended among others by Satish Sharma and Conservative Party donor Lord Jitesh Gadhia.  Bob Blackman (the rabidly pro-Hindutva Tory MP from Harrow East) welcomed Gideon Falter the CEO of the Campaign Against Anti-Semitism (CAA). Falter responded by assuring the meeting that he and his supporters would do all they could to help eradicate the ‘duty’ on the government to make Caste an aspect of race in the Equality Act of 2010. Lord Jitesh Gadhia and Bob Blackman then called for the need to learn from the way the CAA had got the International Holocaust Remembrance Alliance (IHRA) definition of antisemitism passed in the Labour Party. The IHRA definition  is worded in such a way that people who want to criticise the behaviour of Israel against the Palestinians would be classed as anti-Semitic. Clearly Blackman and Gadhia were seeking something similar to prevent criticism of the BJP government in Britain.

However, the Hindu Far-Right’s support for the Tories must also be seen against the reality of India under the BJP. Modi’s coming to power has unleashed an on-going Tsunami of hate with Muslims, Christians and Dalits being lynched and raped on the flimsiest of pretexts and sometimes for no reason other than their identity, with human rights activists, journalists, lawyers and dissenters, being attacked and in some cases, as with feminist journalist Gauri Lankesh, assassinated. Through all this the Hindutva forces have continued to glorify Modi in the communities of Indian origin in Britain.

The violence against minorities and critics of the regime in India has gone hand in hand with a politics of extreme neoliberalism which is selling India to corporate robber barons, particularly Modi’s cronies and nurturing a hatred for the Left expressed by Modi’s acolytes, on social media and in public spaces in the virulent language of fascism. This too has been echoed in Britain with Modi’s supporters viciously abusing critics of the Modi regime in Britain.

As for Israel, Modi is the first Indian Prime Minister to visit the country. He has engaged in a series of massive arms deals. India is now the world’s largest purchaser of Israeli weapons accounting for some 50% of Israel’s arms sales and providing a huge boost to the Israeli economy. These weapons which are projected as ‘tried and tested’ (on Palestinians) include Heron surveillance aircraft, a variety of missile systems, drones modified (by Elbit) for use in Kashmir’s climate, and much more. In addition, India copies Israeli strategies of occupation and land grab. It may even attempt to build Israelis style settlements in the Kashmir valley.  These developments too are projected in the Indian communities in the UK as entirely positive and peaceful moves, essential for the defence of India on the one hand, and signs of the friendship between Indians and Israelis. In fact they reflect a growing similarity between the ideologies of Zionism and Hindutva. Perhaps only faintly separated by the BJP leaders’ misogynistic and patriarchal rhetoric in India of finally allowing Indian men to go to Kashmir to marry light-skinned Kashmiris after they revoked Article 370 of the Indian Constitution.

Modi has now strengthened himself within a circle of repressive far-right regimes. His closeness to Trump was demonstrated most recently by Trump’s attendance of the Howdy Modi event in Houston, Texas and Jair Bolsonaro is to be the chief guest at India’s Republic Day celebrations in January. Boris Johnson, who has declared recently that he would partner Modi in building ‘New India’, would clearly fit comfortably into this club.

The BJP’s influence on the Conservatives government has also increased in recent years. In 2016, Priti Patel, Modi’s ardent admirer was appointed International Development Secretary by Theresa May. Patel has been close to the RSS for a considerable time; in September 2014, as MP for Witham, she congratulated the HSS for inviting RSS leader Dattatreya Hosabale to the UK to attend an event titled ‘RSS, a vision in action – a new dawn’.

Although she was forced to resign over a secret visit to Israel with a lobbyist to meet Israeli officials, Patel is back as Home Secretary and has now been joined in government by a new admirer of Modi, Rishi Sunak the Chief Secretary to the Treasury. Sunak is the son-in-law of Infosys founder NR Narayana Murthy – a who warmly backed Modi for his second term

The BJP want the Tories to remain in power, to ensure, if nothing else, that there are no criticisms from the UK on the future actions it is planning. These are likely to include not only further repression in Kashmir but the imposition of second class citizenship and possible ethnic cleansing of Muslims through a National Register of Citizens and Citizenship Amendment laws. The changes of law will be part of the process of tearing up of  India’s secular Constitution to turn the country into a fascistic Hindu state, something RSS Chief Mohan Bhagwat has already said is ‘non-negotiable’.

Will the Hindu far-right’s interventions in the election actually succeed? It is not the first time they have supported the Tories. In the run up to the 2017 election too, the NCHT was eulogising Theresa May and condemning the Labour Party as ‘grandees… determined to foist Caste labels upon British Hindus’.  May was welcomed to the Swaminarayan Temple in Neasden by representatives of a range of Hindu Far-Right organisations including the HSS. Manoj Ladwa was quoted saying ‘Labour has lost its way to the point that the relationship between Labour and the British Indian community often feels adversarial’.

Will the WhatsApp campaign, which has been used to sway the vote in the Indian elections, have an impact in the UK elections too? As Satpal Muman of Caste Watch UK, Britain’s largest Dalit organisations explains ‘We know how the Hindutva groups have campaigned over caste to shore up the power of the so-called upper-castes,  now Kashmir is the latest drum they want to beat because Labour has stood up to them! But it is not really going to make much difference, the well-off upper caste Hindu businessmen always voted Conservative anyway. One in four Hindus are Dalits and the vast majority of them are likely to vote Labour.’

Anjona Roy, the founder of Dostiyo (an Asian women’s organisation which seeks to relieve social isolation and has three different centres in Northampton and Wellingborough, serving several hundred women) tells me ‘Many of the women at Dostiyo are Gujarati, they have seen the Hindu-Right’s propaganda. But when they come to the centres and meet others like themselves who have been affected by benefits sanctions – women being sanctioned for 52 weeks for missing an appointment – they understand the stark reality of a Tory government. So I am optimistic about Labour’s chances.’

There are also communities of Indian origin in places like Southall, where the Labour vote is likely to be as solid as it has always been. At the same time many Labour policies have a particular appeal for Indians like the pledge to end the ‘rip off’ visa fees, the fair taxation structure, the end to tuition fees, the plans to discuss colonialism in school curricula and much more, and many young people, particularly, inspired by Labour’s radical manifesto are rejecting the WhatsApp messages received by their parents and are eager to vote Labour on 12 December.