HomeNewsBADAUN-BHAGANA-NEVER AGAIN! DEMAND JUSTICE FOR THE VICTIMS AND SURVIVORS OF GENDER/CASTE VIOLENCE!

BADAUN-BHAGANA-NEVER AGAIN! DEMAND JUSTICE FOR THE VICTIMS AND SURVIVORS OF GENDER/CASTE VIOLENCE!

BADAUN-BHAGANA-NEVER AGAIN! DEMAND  JUSTICE FOR THE VICTIMS AND SURVIVORS OF GENDER/CASTE VIOLENCE! 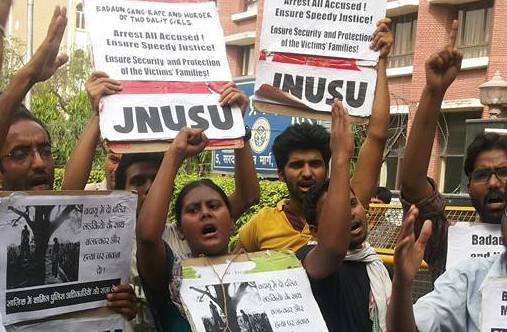 The appalling gang-rape and lynching of two girls, aged 14 and 15, from an oppressed caste in Badaun, Uttar Pradesh, India on Wednesday 28th May is the latest in a long line of  horrific murders and sexual assaults perpetrated on young Dalit women across India recently. Only two months earlier, four teenage Dalit girls aged 13-18 were raped by ‘higher caste’ landowners in Bhagana in Haryana, and the survivors are still fighting for the arrest of the rapists.

Dalit women and girls are facing an onslaught of gender, caste, and class based violence in which the Indian state collaborates. Less than 1% of rape cases of Dalit women by non-Dalits end in conviction. The level of impunity is so total that the perpetrators feel confident to finish off their vile crimes by murdering the victims and leaving their bodies on display. Are the lives of young Dalit women so expendable?

In the Badaun case, the police refused to investigate when the girls’ families reported them missing and even threatened to kill them if they filed a case, and two policemen have now been charged with conspiring with the higher caste rapists. In Bhagana, the courageous survivors and their families have been forced to travel to Delhi and stage an ongoing protest to demand the arrest of the rapists –after the police refused to register cases against the powerful men named by the girls in their testimonies.

Dalit women have been targeted for sexual violence wherever Dalit communities are challenging oppression and exploitation. In Bhagana, the four girls were raped in ‘revenge’ after Dalits demanded that the upper caste controlled village council hand over the land which had been allocated to them by the government, and protested against eviction and harassment. In Bihar, the Ranvir Sena, a landowners’ army aligned with Narendra Modi’s ruling Bharatiya Janata Party, targeted Dalit and Muslim women for horrific violence when the rural poor organized for land and a living wage.

The recent election victory of Narendra Modi and the BJP has further emboldened upper caste and economically powerful rapists. The Brahmanical-patriarchal ideas of the Hindu right, in which Dalit women’s lives have no value, are being combined with intensified neoliberal economic policies which leave Dalits and other exploited and marginalised people even more vulnerable. While Modi tried to reach out to Dalits in his election campaign, his close ally Baba Ramdev’s offensive remarks about Dalit women as the sexual property of upper castes exposed once again the misogynistic casteism of the Hindu right. In the wake of the Badaun case, Modi has condemned the appalling levels of gender violence in opposition-ruled UP, but the fact that he has given a Ministerial post in his government to Sanjeev Baliyan, one of the main accused in the Muzaffarnagar communal violence in UP last year which involved mass rapes of Muslim women, sends out a very different signal.

The last year and a half has seen a powerful movement against gender violence in India. But the Badaun and Bhagana cases painfully underline once again that the struggle continues, and can only succeed if the lethal connections between gender, caste, class and communal violence are recognized and fought.

Dalit groups and progressive and left women’s groups and students organisations in India are on the streets demanding justice for the victims and survivors of Badaun and Bhagana.  Join the solidarity protest outside the Indian High Commission in London on Wednesday 4th June from 4.30 to 6.30pm.

Freedom Without Fear Platform, a network of Black and minority ethnic women and groups http://freedomwithoutfearplatformuk.blogspot.co.uk