HomeNews3rd monthly London Vigil Against Fascism in India – Whose Independence?

3rd monthly London Vigil Against Fascism in India – Whose Independence? 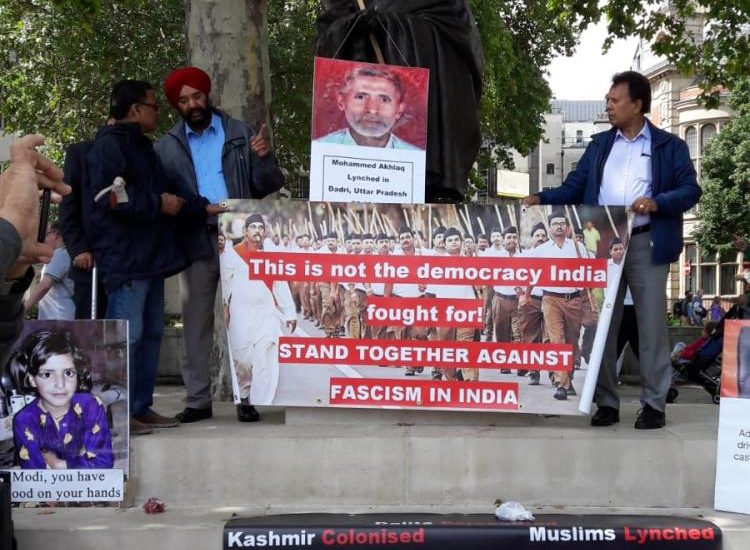 KASHMIR BLEEDS: Under cover of night and in the shadow of the gun, Kashmir’s special status guaranteed by the Constitution was removed and Jammu and Kashmir bifurcated by the Modi government, through the illegal and conspiratorial abrogation of Articles 370 and 35A. The Kashmiri people remain under lockdown, denied any communication with the outside world and facing a massive military presence, leading to fears of a new wave of massacres of civilians. Forces have been told not to negotiate with any protestors but just shoot. Kashmir now faces Israeli-style settler colonialism with non-Kashmiris given the right to buy land.

REPUBLIC OF RAPE: A 19-year-old gang-rape survivor is fighting for her life after trying to bring to justice the BJP leader who raped her. The courageous Unnao survivor who accused BJP MLA Kuldeep Singh Sengar of rape is in a critical condition after the car she was travelling in was hit by a truck with its number plates hidden on 28 July. Uttar Pradesh Chief Minister Yogi Adityanath and his government and police have done everything possible to protect the perpetrator and silence the survivor, including murdering her father and jailing her uncle. Trying to bring BJP leaders and their associates who are involved in rape or murder to justice is now tantamount to courting death.

CASTE SUPREMACIST VIOLENCE: Attacks on Dalits and Adivasis have escalated under Modi’s rule and are being condoned by the ruling party in collusion with the police. In a horrific massacre in Umbha, Sonbhadra, UP, 3 women and 7 men were killed when adivasi villagers were gunned down by nearly 200 upper caste landowners trying to grab their land. The attackers rained bullets for over half an hour while the police refused to intervene.

MOB LYNCHINGS: Muslims are being attacked solely on the basis of their faith and forced to chant Jai Shri Ram (the same slogan BJP MPs have been using to intimidate Muslim and other secular opponents inside parliament).Mob lynchings have reached an all time high in July, with young boys of 15 and elderly retired servicemen among those targeted for horrific violence by mobs emboldened and often directly organized by the RSS and BJP.

MASS DETENTION AND DEPORTATION: In Assam, 4 million people facing statelessness, incarceration and deportation under the National Register of Citizens are waiting to hear their fate on 31 August. Thousands are aready in detention camps, The attack on citizenship rights is planned to be rolled out in other states too and is expected the lead to a crisis of statelessness and suffering on an even bigger scale than that of the Rohingya in Myanmar.