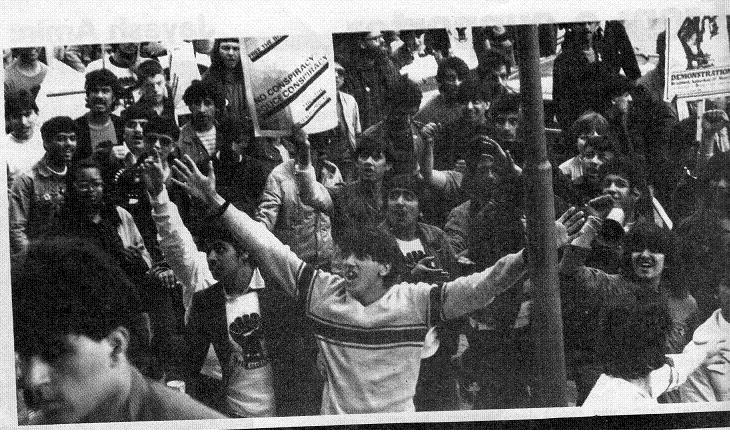 In July 1981, 12 young Asian men were arrested in dawn raids across Bradford and charged with conspiracy to make explosives and to cause explosions.

Almost a year later, following a trial which exposed the scale and intensity of everyday racist violence and the extent of police racism faced by their communities, they were all acquitted.

On the other side, racist skinhead thugs had invaded Black (mainly African-Caribbean and Asian) communities attacking people on the streets and in their homes.

On July 11th the news that vanloads of skinheads were planning to invade Bradford’s main Asian area spread. Only a week before coachloads of skinheads had attacked Southall’s Asian community. Community self-     defence, not the police had protected Southall.

In Bradford, the recently-formed United Black Youth League (UBYL) responded by mobilising youth and organising in the community’s defence. They prepared petrol bombs, that were never used in case they were needed to construct ‘a wall of fire’ to keep the fascists out.

Some weeks later the unused petrol bombs were found and 12 activists from the UBYL were arrested with Special branch involvement.  The Bradford 12 trial exposed state and police racism both in Bradford and nationally. It also proved the right of a community to self-defence.

Today, in the face of colonial wars and escalating racism in Britain, particularly targeting Muslim communities, it is time to reclaim the spirit of the Bradford 12 and remember our slogan:

Self-defence is no offence!

We must defend ourselves!

A Day of Speakers, Discussion and Celebration http://thebradford12.wordpress.com/commemoration-in-london-23rd-july-2011/   With the Bradford 12 defendants, lawyers for the Bradford 12 Ruth Bundey and Gareth Peirce,