A savage and barbaric assault by powerful Congress Party-backed Jat landlords has left Bant Singh, Dalit leader of the Mazdoor Mukti Morcha (All-India Agrarian Labour Association) in Mansa, Punjab, with both hands and one leg amputated. His ‘crime’ was his sustained resistance to upper caste power and violence, and in particular, his struggle to bring his minor daughter’s rapists to justice. This case is currently generating massive protests in Punjab. 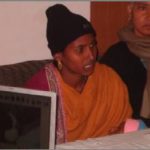 This protest will coincide with a massive gherao (encirclement) of the Punjab State Parliament in Chandigarh.

We will also be handing in a letter to the Prime Minister, Manmohan Singh, urging him to take action. (see the demands at http://new.petitiononline.com/Bant06/petition.html)

Some background on the  situation for dalit agricultural labourers in Punjab and the activities of the Mazdoor Mukti Morcha, Bant Singh’s organisation, are reported on at http://www.frontlineonnet.com/stories/20060224002904000.htm