The ‪#‎ModiNotWelcome protests in London 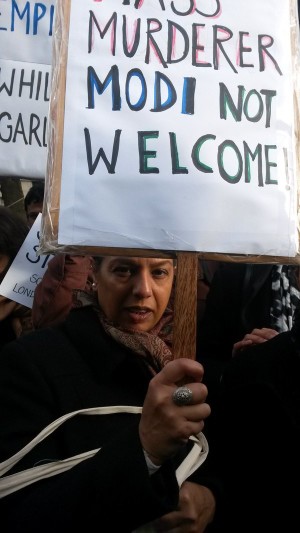 #‎ModiNotWelcome protests in London at Downing Street and Parliament Square, organized by the Awaaz Network of which South Asia Solidarity Group is a constituent organisation, were attended by thousands of people. They included members of women’s organisations, left South Asian groups, Dalit, Sikh and Kashmiri groups as well as a Nepali contingent.

Slogans such as ‘Modi, Modi you can’t hide- you committed genocide’ and ‘Modi, Modi, RSS, Nazi Fascism No Less’ and ‘David Cameron – Shame, Shame – inviting Modi – Not in Our Name’ pursued Modi as he moved from Downing Street to Parliament Square.  As he hypocritically laid flowers at the Gandhi statue, even as his party prepares to celebrate the death anniversary Gandhi’s killer, Nathuram Godse,  the crowd which lined the square roared ‘shame on you’ !

Speakers at a rally facing the square vowed to continue to stand in solidarity with those opposing Modi and the Sangh Parivar in India. Among other speakers, Amrit Wilson of South Asia Solidarity Group spoke about the horrific escalation of violence against minorities, Dalits and women which has been orchestrated by the Hindu Right and supported by the Modi government – that people were being lynched with impunity just for what they eat or whom they love. 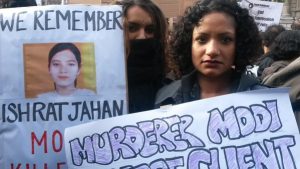 She said ‘We stand in solidarity with those fighting Hindutva fascism in India, with the workers facing the sweeping away of labour laws, and we stand with the people of Bihar who have decisively rejected Modi’s hate politics. Modi’s visit to Britain is about selling off India to the new versions of the colonial East India Company.‘ Mentioning the fact that India is the biggest client of Israel’s arms industry, she said that the arms India buys will be used against Indian citizens.

Satpal Muman spoke of the horrific tally of killings of Dalits since the new government had come to power and highlighted the way Hindutva organizations in the UK have systematically tried to block the implementation of the anti-caste discrimination in the UK. Rahila Gupta of Southall Black Sisters spoke about how  gender violence and attempts to control women had intensified under Modi.

Sangeeta a student active in the#‎ModiNotWelcome campaign, highlighted the way in which Hindu Right groups in the UK  were dividing the South Asian diaspora in UK, including the younger generation, and was feeding into Islamophobia, and how these groups had imported the myth of ‘love jihad’ into Britain. 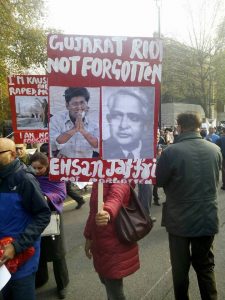 tims of Modi in Gujarat, including Ishrat Jehan, Ehsan Jafri and Kauser Bi. Nepali protesters demanded that Modi  ‘back off!’ and lift the devastating blockade of Nepal.

The night before the #ModiNotWelcome protest at Downing Street and Parliament Square, we had received threatening phone calls warning us that ‘15,000’ Modi supporters would converge there and there would be disturbances. But in fact only a small group of 50 showed up and stood opposite the tail end of the demonstration from where they hurled invective -demonstrating their much touted ‘tolerance’.

The protesters vowed to continue their campaign both against Modi’s visit and against the Hindutva forces in the UK, as well as standing in solidarity with those who are confronting and resisting Hindutva’s corporate fascism in India.